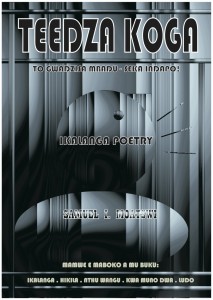 How to keep poetry relevant and useful for a broad audience?  What he calls “educational poetry” is the answer of Samuel Moatswi, a young Gaborone author, who recently published Teedza Koga (loosely translated ‘Just Listen’).

The book contains 46 poems written in Ikalanga, widely varied in themes that range from love, Ikalanga culture, world history, counsel on doing good, humor, nature, poems of hope, and many other issues that affect people’s day to day living.

Most of the poems have questions at the end meant for revision purposes and many have explanations as well. The total number of questions adds up to more than 140, which means that a reading group or class could use the poetry book for discussion.

Several Ikalanga poetry books have appeared over the years from Mukani Action Campaign in Francistown by authors like A.G.T.K. Malikongwa and Monty Moswela. But Moatswi is the first in his generation to publish his work in Ikalanga: “As an aspiring writer/poet (mostly writing in English) I decided it would be best if I expressed my thoughts and ideas in my mother tongue because I am a native Ikalanga speaker, and that is just how the book came about.”

“I have realized that there are not so many Ikalanga language books published, and interest in the language seems to wane, therefore my intention was also to help preserve the language in such a way that it can be archived for referencing purposes by future generations,” explains the new author.

A 26-year-old Kalanga young man, born and raised in Gaborone City, Botswana, he is currently studying for a Bachelor of Commerce in Human Resource Management — and writing in his spare time.

Moatswi also aims to promote written Ikalanga language and literature among non-Bakalanga who are interested in both the people, the language and their culture. For that wider audience, he has just completed a translation of Teedza Koga into Setswana, the language used most in Botswana.

Altogether, Moatswi’s goal is to produce a trilogy of the TEEDZA title, the first being the recently published Teedza Koga, the second, Teedza Kwazo is already scripted and the third and last installment is yet to be written.  Teedza Kwazo, which means ‘Listen Hard’, has 50 poems and other features similar to those of his first work, but at this point he faces the usual challenges of struggling to publish and print anything due to lack of finances.

His future plans include writing a full Ikalanga novel and a script for a radio drama.

Five poems from the collection can be viewed online.