Kalanga culture is famous for its music and dance, patterned pottery, and the extensive archaeological sites it has left behind. The best way to enjoy all these is to attend the annual festival at the Domboshaba ruins (about 75 km north of Francistown, Botswana).  The dates for 2012 were September 28 – October 1 (see more details) and will be about the same time in 2013.

An excellent survey of traditional music and dance for rain prayers and enterntainment can be found in an anonymous essay on “Music of the Bakalanga“.  Other items:

A convenient photogallery of Kalanga customs and items from daily life can be found at the Bukalanga site.

PLACES to VISIT in ZIMBABWE connected to Kalanga culture 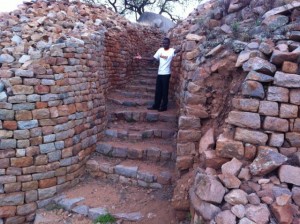 Flourishing from the 15th to 17th centuries, with 7000 inhabitants, Khami was the largest town in Southern Africa then.

The Khami Ruins is a World Protected Heritage Site 20 km west of Bulawayo, with the remains of the capital of the Butua state (1450-1685). The huge stone walls were built in the 1400s by the Torwa dynasty coming from Great Zimbabwe. The historic complex includes several sections, including views over the Khami river and dam (Wikipedia entry) (15 pictures) (TripAdvisor).

Leopard’s Kopje is an important late Iron Age site dated to 980 AD, which gives its name to the culture found in the region from the 10-13th centuries. It is located 3 km north of Khami.

Danangombe (Dhlo-dhlo) was one of the centres of the Rozvi culture, which succeeded the Torwa culture based at Khami. The site consists of a ruined town dating from the 17th or 18th centuries AD, and therefore probably occupied just after the abandonment of the site at Khami. The town plan follows a similar layout to Khami but is on a smaller scale. The site was destroyed in the 1830s when the Matabele arrived in the area. —  Danangombe is located about eighty kilometres southwest of Gweru (in the direction of Bulawayo and about 35 kilometres south of the highway). It is not often visited due to the poor quality roads in the area. Nearby are the smaller ruins at Naletale, which were occupied at the same time.

Naletale (or Nalatale) is located about 25 kilometres east of Shangani and just north of the Danangombe ruins. The ruins are attributed to the Kalanga Torwa State and are thought to date from the seventeenth century. The primary monument at the site is a colossal wall constructed from stone masonry. It is highly decorated, featuring all of the designs of the Zimbabwe architectural tradition. The site was damaged by early treasure hunters seeking gold but it remains one of the best-preserved and most impressive ancient monuments in Zimbabwe. (Wikipedia) (photo: www.steveislost.com)

Plumtree Town (on the main road west of Bulawayo) is the centre of Kalanga activity in Zimbabwe. The surrounding Bulilima-Mangwe constituencies are home to most of the Kalanga in Zimbabwe. A cultural facility was organized at Masendu Kalanga Cultural Village.

Njelele Shrine is the most famous place of pilgrimage and rain dances for the traditional Mwali spirit.  It is located in Matobo Hills (UNESCO World Heritage Site) about 35 km south of Bulawayo, but access is limited to certain seasons for religious reasons.  The Mwali religion has long been associated with the BaKalanga (pdf).

PLACES to VISIT in BOTSWANA

Dombashaba (meaning ‘red rock’ in Kalanga) is a stone-wall site dating back to 1440AD, where a regional ruler had his residence and court. The walls incorporate flowing courses of granite blocks with beautiful decorative motifs built around existing boulders and trees. The first archaeological excavations conducted in Botswana were undertaken on this 8-hectare site by a group of German explorers in 1929 who discovered fragments of Chinese celadon porcelain which were obviously special gifts given to the ruler living here some time in the past. Every year, a major Kalanga cultural festival is held at the foot of the hill and ruins, near Kalakamati, about 80 km north of Francistown.

Francistown is the second largest city in Botswana, with a population of about 100,000, and is often described as the “Capital of the North”. It is the main urban center for Kalanga culture in Botswana. One of Botswana’s oldest towns, Francistown was the centre of southern Africa’s first gold rush in the mid 19th century (based on shafts that had been used by as far back at the 12th century).  The Supa Ngwao Museum contains exhibitions on the culture and history of the Kalanga people, including pottery, woodcarvings, basketry and musical instruments. Handcrafts can be purchased at the Museums’s Craft Shop, which supports many craftsmen/woman fornm sorrounding areas.

Botswana part of the Kalanga homeland