All set for BuKalanga Gathering

The Kalanga language and Cultural Development Association (KLCDA), will host a Gathering of its members and BaKalanga in general to celebrate TjiKalanga Language and Culture on the 27th of December 2015 at Plumtree High School, kuTitji tjaGetjenge.

The end of year is a time filled with festivities, celebrations, family get-togethers, ceremonies and many more fun-filled events. The Kalanga family will not be left out. BaKalanga will gather in Plumtree, kuTitji to celebrate their language and culture, get to know each other amid a variety of performances from various popular arts groups. As the Kalanga saying goes, “Bukamu igaswa gohhadzisiwa nemadlo!”, there will be plenty of traditional Kalanga food including mxhanxa, tjimoni, mahonja, manyadzigwa, mahwe to mention just a few.

The event will also fundraise for the Kalanga ZJC Textbook Writing Project which is already underway to facilitate the introduction of TjiKalanga Language as a subject at Secondary School level. This follows the successful examining of the language at Grade Seven level by the Zimbabwe School Examination Council (ZIMSEC) for the first time this year (2015). KLCDA is working tirelessly to ensure that the Textbooks are published by early next year.

All roads lead to Plumtree High School on the 27th of December 2015, the venue for BuKalanga Gathering convened under the theme, “BuKalanga ndiko kanyi kwedu”. The theme has been aptly crafted to celebrate the time of returning home for the holidays by all BaKalanga who work outside BuKalanga including neighbouring countries. The theme is also a popular Kalanga song that has been sung by all BaKalanga to remind themselves of their true identity and proud of history.

KLCDA would therefore like to take this opportunity to extend a special invitation to all BaKalanga and everyone who has an interest in the development of our language to come and be part of the gathering.

TjiKalanga gained official language in Zimbabwe after the enactment of the new constitution in 2013. 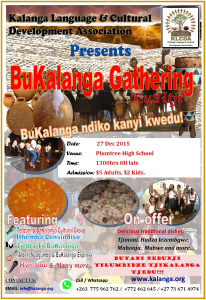