Kalangas in Botswana need their language to be taught at schools

Domboshaba (Botswana) – The 13th annual Domboshaba Festival of Culture and History (Nshangano weBaKalanga) ended in Domboshaba, North-East District of Botswana, amid calls for the minority language to be given its due recognition by being introduced as a subject at schools. Botswana only recognizes SeTswana as that country’s national language, while English is considered a medium of communication. 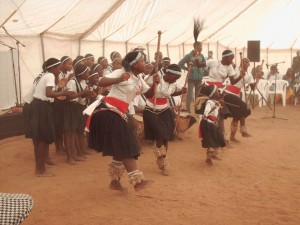 Women perform a traditional cultural dance during the Domboshaba festival of culture and history (Nshangano weBaKalanga).

The two-day event meant to sensitize the BaKalanga on their cultural identity and history was held at the traditional venue, Domboshaba Cultural Village, which is only a stone’s throw from the Domboshaba ruins.

Speaker after speaker at the grand occasion that included both the political and traditional leadership emphasized on the significance of Kalanga as the mother language for the people in the area and challenged the Botswana government to immediately introduce it at schools in order to preserve and prevent it from extinction.

“BaKalanga let us be all united in our quest to have our mother language taught at schools for we can only be heard when we unite and speak with one voice as the BaKalanga,” said Chief Mosojane.

She added: “I therefore challenge you BaKalanga to hold fast you culture, be united and go forward.”
The proceedings which began with the singing of the national anthem (Lumbo gwetjaba) for the first time in TjiKalanga saw the BaKalanga perform a number of their traditional dances that included the Ndazula, Hosso, Hosanna and many others. A group of women also performed a drama on how the BaKalanga women traditionally get married. 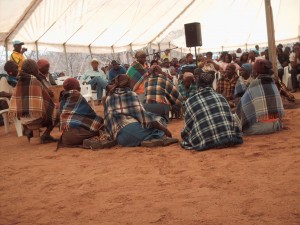 Kalanga women perform in a drama showing how Kalanga women traditionally get married during the Domboshaba festival of culture and history in Botswana on Saturday.

The Botswana Kalangas were joined by a delegation of their counterparts from Zimbabwe led by Tshidzanani Malaba, secretary of the Kalanga Language and Cultural Development Association. Delivering a solidarity message Malaba encouraged his Botswana counterparts to continue engaging their government on the recognition of their language adding that in Zimbabwe Kalanga was already being taught at schools though there were funding and literature challenges.

The Zimbabwean delegation also comprised Thamani Nleya a board member of the Kalanga Language Development Association, Ndzimu Unami (Emmanuel), the author of “The rebirth of BaKalanga” and veteran broadcaster, and poet Nqobile Malinga who also performed at the festival.

On sale at the festival were a variety of Kalanga textbooks that included the Kalanga Bible, Ndebo Mbuya ne Njimbo (New Testament and Psalms).

The Kalangas both in Zimbabwe and Botswana are found along the borders of the two countries, far away from the capitals Harare and Gaborone respectively. The erection of the borders sometimes makes it difficult for Kalangas to attend their events when held in the other country.