By Divine Dube and Silusweyinkosi Mhlanga 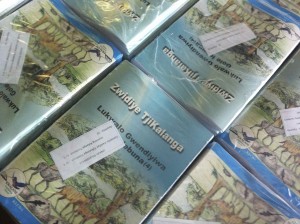 The Kalanga textbook series goes up to grade 7 and includes teachers’ books.

The organisation’s chairman Mr Pax Nkomo told Kalanga News this week that the textbooks for all grades are ready and have been submitted to the Ministry of Education, Sports and Culture.

Nkomo, who also doubles as director of Kwalani Publishing Company (KPC) a subsidiary of KLCDA which was contracted by the government to publish the books, said the Association is waiting for the government to assess and distribute the books to schools.

“As facilitators we have honoured the government’s request to provide Kalanga literature and it is now up to it (government) to assess and distribute books to schools,” Nkomo said.

“Our role is to facilitate the teaching of TjiKalanga as a Kalanga organisation with knowledge on TjiKalanga. We received financial assistance from the Education Trust Fund (ETF) and managed to publish books as per the government’s request”.

He also said KLCDA is going to continue engaging the government to teach TjiKalanga in schools giving it the same prominence as Ndebele and Shona in line with the newly adopted constitution.

“We will continue lobbying the government to teach TjiKalanga so that it is at par with Ndebele and Shona. As I speak it is now taught in schools in Bulilima, Mangwe and Matopo in Matabeleland South Province while other schools in other Kalanga speaking districts are waiting for books from the government.”

Kalanga is one of the endangered languages which has been accorded official status in the Zimbabwean constitution after being marginalised for more than a century. Kalanga schools have been obliged to teach Ndebele since 1931 but the 2002 Ministry of Education directive and the recently adopted constitution will see these languages being fully introduced in the school curricula up to university level.

Kalanga author Ndzimu-unami Emmanuel Moyo commended the adoption of the new constitution saying it was a first step in the rebirth of TjiKalanga which has been on the verge of being extinct.

“Now that we have a constitution that recognises TjiKalanga, it is high time Kalanga authors invest in writing literature that facilitates the teaching of Tjikalanga in schools. As an author I intend to write more books to promote TjiKalanga.”

“I have already set the tone by writing extensively on Kalanga history and I am working on more books to be used in the Kalanga syllabus. I hope in the next five years Tjikalanga will have been fully introduced in the education system,” Moyo said.